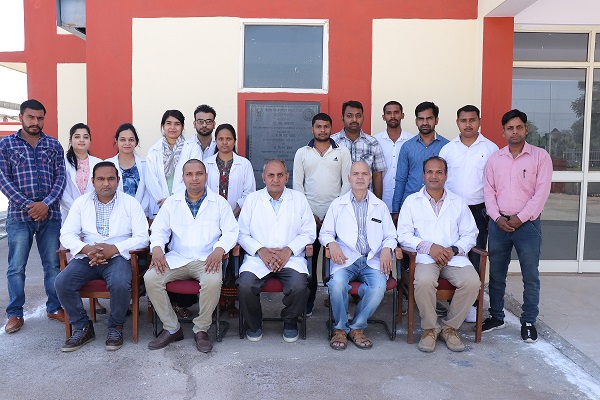 Posted By: cirbres hisaron: July 30, 2020In: No Comments
Print Email

Dr. T. Mohapatra informed that scientists of CIRB have made magnificent and acclaimed achievements in the field of buffalo cloning research. They produced 1) seven cloned copies of a superior breeding bull, M-29, and 2) a re-cloned calf of a cloned bull Hisar-Gaurav. These clones are born from October 2019 to Jan 2020, and they are healthy and growing well. These achievements are the world’s first reports to produce multiple clones and recloning of Murrah buffalo, which is famous all over the world for its potential to produce a high quantity of milk. He stressed that cloning technology can be one of the suitable options for faster multiplication of elite bulls in the shortest possible time so that their semen could fulfill the nation’s demand.

Dr. BN Tripathi, Deputy Director General (AS), Indian Council of Agricultural Research, New Delhi, congratulated the team and said that India’s white revolution cannot be imagined without the contribution of buffalo, and to achieve this sustainably, the best productive buffaloes need to be bred through superior germplasm. ICAR’s animal science division has been working on different research avenues to produce quality animals, aiming to increase buffalo’s milk productivity.

Dr. SS Dahiya, Director, CIRB, Hisar informed that to increase the milk productivity of buffalo, CIRB has been exploiting advanced scientific methods including buffalo cloning. At present, CIRB has ten cloned bulls, of which two are under semen production. These cloned bulls can be used to propagate elite germplasm to improve milk production.

Dr. PS Yadav, a principal investigator of the NASF funded cloning project, informed that the objective of the project is to produce genetic copies of superior bulls for breed improvement. Simultaneously, we are also working to make the stakeholders aware of this technology before its wider application in the field.